Takes a genome as a contigs-db, and tells you whether it can be considered as an organism of high metabolic independence, or not.

The goal of this script is to give access to some recent findings between the metabolic make-up of a given organism and its ability to survive stressful conditions in the human gut, and classify whether a given genome can be considered as an organism with high metabolic independence (HMI) or not.

The idea implemented in this script should work for human gut microbes, however, we have not yet tested the concept of HMI/LMI beyond that.

The concept of ‘High Metabolic Independence’

Briefly, a microbial organism will have high metabolic independence (HMI) when its genome encodes, with high completeness, a set of key metabolic pathways for the biosynthesis of key molecules such as amino acids, cofactors, nucleotides, lipids, etc, through which the organism will be fairly robust to environmental stress, changing environmental conditions, and/or factors that can disrupt microbial communities. In contrast, low metabolic independence (LMI) is characterized by the complete absence and/or low level of completion of the same set of pathways, which renders organisms with LMI unable to produce critical metabolites that are often necessary for survival.

Even if this hypothesis has merit, there are open questions that needs to be addressed, such as (1) which specific metabolic pathways would be necessary to calculate the extent of metabolic independence, (2) how complete the set of pathways should be in a given genome, or (3) to what extent these insights are environment-dependent (i.e., will the set of pathways and completion for human gut microbes also work for marine microbes, etc). Despite the lack of clear answers to these questions, this script offers a framework to investigate the extent of metabolic independence of gut microbes based on our recent study. In this study, we were able to define two groups of microbial genomes following an FMT experiment: the first group was composed of populations that were able to colonize many FMT recipients and were prevalent in the global gut metageomes (the good colonizers). The second group, in contrast, was composed of populations that largely failed to colonize FMT recipients, and were also missing in global gut metagenomes (the poor colonizers). Using the programs anvi-estimate-metabolism and anvi-compute-metabolic-enrichment, we asked the question which metabolic pathways were differentially enriched between these two groups of genomes (more specifically, we only kept the modules that were ‘associated’ with good colonizers with a q-value of 0.05 and were at least 75% complete in at least 50% of the genomes in the good colonizers group). This analysis revealed the following set of 33 KEGG modules:

Estimating the level of metabolic independence

This script will use by default the list of modules that we determined to be associated with high metabolic independence, and calculate the completion scores of these modules in a given contigs-db to classify it as an HMI or an LMI organism. Here is an example run:

Running this on a Ruminococcus gnavus genome will print something like this:

Determining a new set of modules and a threshold

You can provide this script with a different set of metabolic modules, a different threshold, and/or a different KEGG data directory to utilize:

If you wish to update the list of modules based on your own empirical data, you can follow this simple recipe:

The exact methods of estimating metabolism and computing enrichment are up to you, but note that this strategy only works if you already have genomes that you have manually identified as HMI or LMI.

This may require adjusting the threshold for classification. Which can be done in a similar fashion, where you determine a cutoff that best separates your genomes in either groups. The plot below shows our two groups of genomes, good and poor colonizers. With the assumption that most of the good colonizers had HMI, and most of the poor colonizers had LMI, we plotted the overall completion of metabolic modules of interest, and selected a number that separates them: 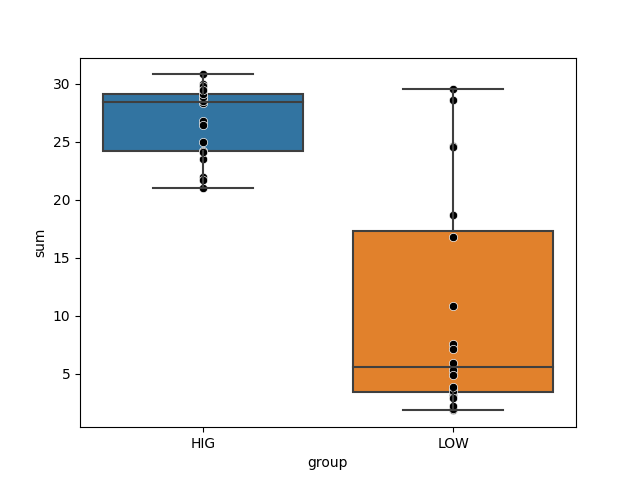 Since individual completeness scores have a maximum of 1 (for 100% complete), the maximum value of the sum will be n, where n is the number of metabolic pathways in your list. So you should be selecting a threshold between 0 and n, but most likely on the higher end of that range, since high metabolic independence is generally defined as high completeness scores across the set of pathways). It will depend on your data, of course.

By default, this script relies on the pathwise completeness scores for each module in the input list. If you want to use stepwise completeness instead, simply add the --use-stepwise-completeness flag (you may also want to adjust the threshold value):

Not sure what we’re talking about here? You can learn about the differences between pathwise and stepwise metrics on this page.

Are you aware of resources that may help users better understand the utility of this program? Please feel free to edit this file on GitHub. If you are not sure how to do that, find the __resources__ tag in this file to see an example.