Back to the main page of anvi’o programs and artifacts.

Depending on the output options used when running anvi-estimate-metabolism, these files will have different formats. 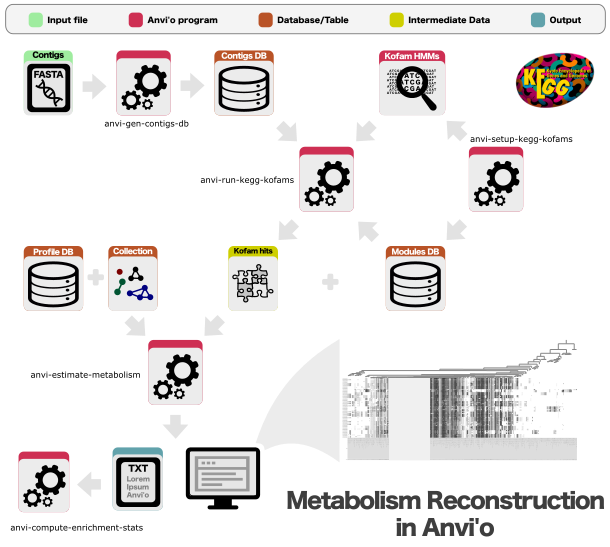 The long format output modes produce tab-delimited files. Each line in the file (except for the header line) is indexed by an integer in the unique_id column. Different output “modes” will result in output files with different information.

The ‘modules’ output file will have the suffix modules.txt. Each line in the file will represent information about a KEGG module in a given genome, metagenome, or bin. Here is one example, produced by running metabolism estimation on the Infant Gut dataset:

The ‘kofam_hits_in_modules’ output file will have the suffix kofam_hits_in_modules.txt. Each line in the file will represent information about one KOfam hit in a given genome, metagenome, or bin - but ONLY KOs that are a part of at least one KEGG Module are included in this output. Hits are organized according to the KEGG module that they belong to, and more specifically the path through the KEGG module in which the KO appears.

What is a path through a KEGG module, you ask? Well. KEGG modules are metabolic pathways defined by a set of KOs. For example, here is the definition of module M00001, better known as “Glycolysis (Embden-Meyerhof pathway), glucose => pyruvate”:

For every KO in the path above that has a hit in the contigs-db, there will be a corresponding line in the ‘kofam_hits’ output file. The same will occur for every possible path in every single KEGG module, resulting in a lot of lines and extremely repetitive but nicely parseable information.

The kofam_hits output file will have the suffix kofam_hits.txt. Unlike the previous mode, this output will include ALL KOs, regardless of whether they belong to a KEGG Module or not. However, since only a subset of these KOs belong to modules, this output does not include module-related information like paths and module completeness.

The ‘modules_custom’ output mode will have user-defined content and the suffix modules_custom.txt (we currently only support output customization for modules data). See anvi-estimate-metabolism for an example command to work with this mode.

Matrix format is an output option when anvi-estimate-metabolism is working with multiple contigs databases at once. The purpose of this output mode is to generate matrices of KEGG module statistics for easy visualization. Currently, the output of this mode includes a module completeness matrix, a matrix of binary module presence/absence values, and a matrix of KO counts. In these matrices, each row is a KEGG module or KO, and each column is an input contigs-db.

Here is an example of a module completeness matrix: